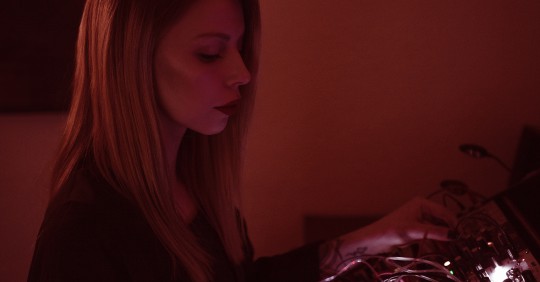 Since having established herself in Berlin in 2012, Arielle has been immersed in the process of defining her own aesthetic and approach to music production. In 2016, she completed a degree in Sound Engineering with a focus on deep listening/spatial sound practices, and thereafter joined the Berlin-based creative studio 6th Finger where she fine tunes her recording and post-production skills, blending modern compositions across diverse media.Through various collaborations with visual artists, she has developed a specialism in audio recording manipulations, and has expanded studio practices, from digital to analog, computer-based to modular synthesis.

Those techniques thread a line in her ambient and experimental sound works wrapped in a concept of fragmented narratives. As
a performer, she processes material through modular synthesis taking a more improvisational, live format in which suspended rhythms, lush vocals and abstract sonorities are intuitively transformed through obscure, yet charming territories. Arielle’s practice includes a wide range of interdisciplinary projects, including short films, interactive installations, dance and solo performances. Her sound works were presented at Berlin venues including Berghain, Funkhaus, Spektrum, Ohm, and most recently at the ArtTech Festival Bogota and Sonica Festival Showcase Berlin.