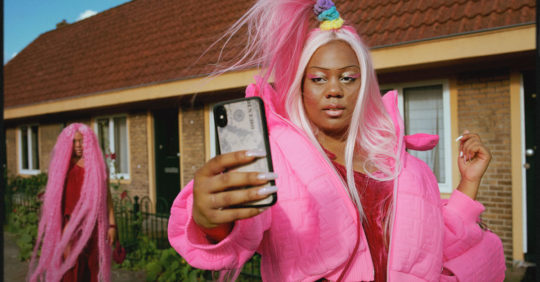 At just 19 years old, born-and-raised Brazilian LYZZA is taking over the experimental club scene. She’s a DJ – Producer – Vocalist and curator with ties to ​Fade to Mind (US)​ and ​Bala Club (UK)​. She’s become a familiar face during radical and underground club nights as a DJ and has been seen on line-ups alongside names like ​Fatima Al Qadiri​, ​Evian Christ​,​Le1f​, ​Yves Tumor​ and ​SOPHIE.​ Since recently also Mykki Blanco’s tour DJ.

From secretly deejaying at 16 in clubs in Amsterdam like Paradiso and NYX, LYZZA quickly paved her way to international clubs in Berlin, London, Madrid, Barcelona,Vienna, Warsaw and Shanghai.

Ever since deciding to take making music seriously somewhere in 2016 and teaching herself to use Logic with online tutorials, LYZZA has been building a name for herself in the alternative music and club scene. On the one hand, this is down to her music. LYZZA’s sound stands apart, erring more towards whole compositions than tracks built specifically for the club. On the other, it’s because of a reputation she’s growing as someone who speaks their mind and is here to change things by showing people that there are ways to do things outside of the status quo if you’re willing to try and push yourself hard enough.

Released in November 2017 through LA-Based label SYMBOLS, her new EP Powerplay is the latest step in a burgeoning career. Prominently featuring her own voice, its an energetic debut full of cracking drums, hardstyle kicks and trance melodies.