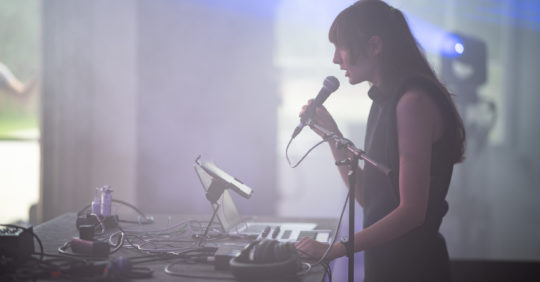 Aude Van Wyller, born 1991, is a visual artist and composer from Paris. She is interested by poetry and music and its dispersion in many spaces such as stairs, amphiteaters, concert rooms, gardens… After creating multi-channel installations performing readings with actors and recordings, she worked on a single project of sound poetry and electronic music, under the moniker Oï les Ox, called ‘Crooner qui coule sous les clous’ (A crooner that sinks under nails).

It has been released in 2020 on tape and reissued twice in 2021 and 2022 on vinyl via The Death of Rave (UK) and digitally by Primordial Void (US). She released another EP on K-Rut/Kraak records (BE) with ‘Terrain Transparent’ in 2020. She has been resident in 2021 at Le Botanique, Les Ateliers Claus (Brussels) and Hetbos (Antwerp). She played at Heart of Noise festival (Innsbruck, 21), at Schiev festival (Brussels, 22), at Oxi Club (Berlin, 22) and her live set has been broadcasted on the SWR2 german television and radio channel (Freiburg, 22).