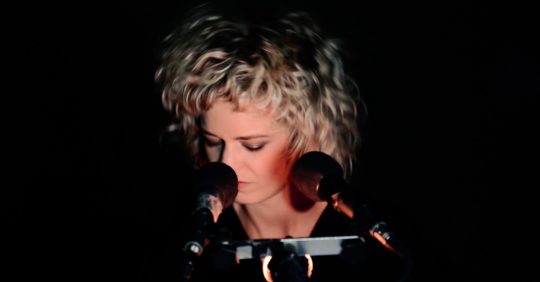 After two minimalist electro-concrete albums, Perrine en Morceaux explores in her last album RIEN what maximalism can sound like. Concept-album of a rare intensity in the pop world, RIEN is composed as one uninterrupted hardpop opera made of 12 chapters. Far from today’s slick and high def electro, she produces uneven organic soundscapes out of repetitive afro-indus analog beats and field recorded sounds played from non-sync hardware samplers (no computer on stage). From within these thick textures and polyrhythms, her voice _direct, utterly melodic and inhabited_ deploys protest poetry and metaphysical stories about time. The journey is restless and changing: the album departs from a demanding experimental noisy side, then it reaches more airy and hypnotic tunes before ending on the pop side with radio efficient binary tunes. Perrine Bailleux’s practices range from music and song-writing to performance, visual art, philosophy, teaching and writing. By means of different medias and forms, her commitment consists in searching for artistic and theoretical means dedicated to enlarge the horizon of possibilities and escape prefab futures. Some of her current projects have not been released yet: she tours a lecture-concert about a painting by avant-garde artist Malevich where she presents, in songs, a completely new perspective on his last period ; she is writing an essay where she gives her account of what a song is; she is working on a fourth PEM album based on birds recordings.