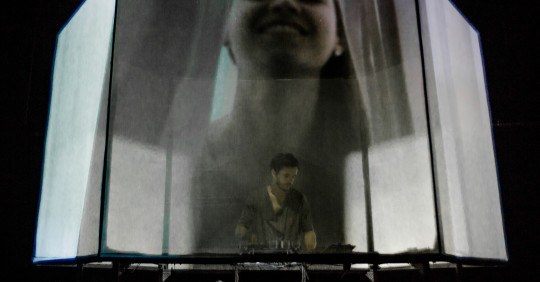 PRISM is a musical and visual creation, a mix of live electro and cine-concert which is spatialised and edited in real time.

A hexagonal screen is set up on stage around artist 9th cloud, shutting him in as well as opening him up to his own inspirations. He interacts with these screens in order to change the projection order, distance and appearance, such that the music influences the images, and vice versa.

PRISM’s focus is on the creative pulse and the random endurance of memories, and the project attempts to dramatise causal links between these two themes. Listeners are placed between reality and imagination, between live and projected action. A creative dialectic establishes itself between image, light and sound, leading to an illusion or blur for the viewer. The experience is not about sending a message but rather sharing a memory-based feeling.

Many resurgences show modes by which ideas are born, cross paths, get misplaced, blend together again and enter into resonance with themselves (as in the larsen effect) to create a sound. There is enough space for the viewers, room within the cogs, a false symmetry, a mirrored structure that offers cracks through which our imagination can freely glide.

PRISM is a musical and visual creation, a mix of…