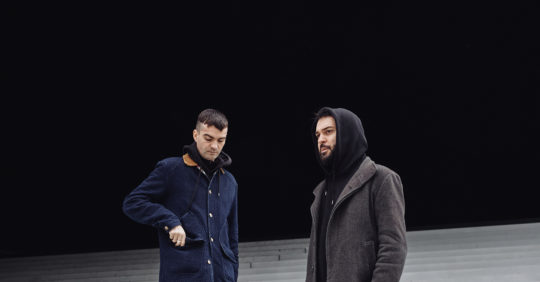 Apollo Noir (music) and Thomas Pons (illustrator) started their collaboration with a video clip dedicated to the song “(Un)related to God” which is at the origin the title of the second track of Apollo Noir’s 2nd LP album Chaos ID. From these first exchanges between music, cinema and illustration a true creative symbiosis is born with a desire to express this collaboration as an evolving stage.

APOLLO NOIR :
A chap faithful to his roots, both musical and geographical, French artist and producer Remi Sauzedde aka Apollo Noir spent his juvenile years between the black woods of his motherland Auvergne and the rehearsal cave of his hardcore punk band.
As a grown up, thanks to a refined transversal culture and an accumulation of analogue synths which helped him to achieve his ambitions, he is now performing a hybrid and quite unique form of electronic music.
THOMAS PONS :
Thomas Pons is a director and designer, a versatile artist exploring the animated image in all media: its original form in visual arts exhibitions; its moving form in music videos, short films and series; and its interactive form in augmented reality, virtual experiments and live VJing.
His mainly black-and-white graphic universe, tinged with poetry and darkness, questions Man and his habits by way of a recurring figure: a black silhouette, symbol of our psyches, travelling through the landscapes of his different projects.