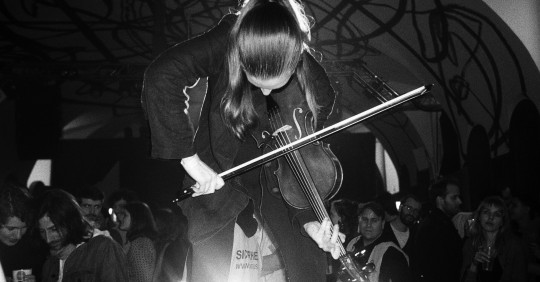 -her performances are as much disruptive as they are refined and can easily stand next to the most heavily produced club sounds- Armed with a viola, Beatrix Curran aka Battle-ax, envelops a space with relentless chains of reverb and distortion building up cohesive, strong and highly emotive soundscapes.

Battle-ax both undermines and is reinforced by her classical training. Born in Sydney, Australia, she moved to Vienna, having been first attracted to the city’s musical history. It was when she began playing in clubs however, that her improvisational style was able to brazen itself between romanticism, atonalism and an energized repetition motivated by those she plays alongside. At Vienna’s Bliss night, among musicians such as Hieroglyphic Being, TCF, HVAD and DJ Stingray.

She often collaborates and performs with fellow Vienna-based producer Forever Traxx and Berlin collective Dawn Mok. Battle-ax will play at the 2017 Wiener Festwochen and has an upcoming release on Antwerp label Ultra Eczema.

Her performances are as much disruptive as they are refined…