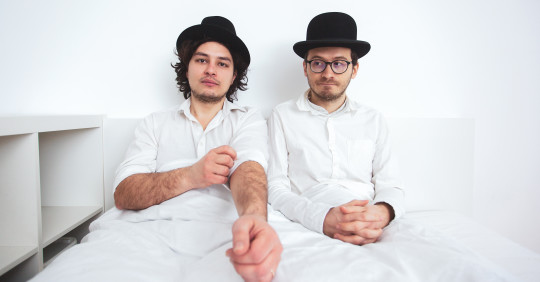 Buster Keaton (UK) is comprised of two young musicians, Csaba Németh (drums and percussions) and Gábor Nagy (keys and electronics). The project is an outcome of their friendship, born somewhere along the borders of neo-romanticism, post-ambient and techno. The intensity of their concerts requires constant attention on the part of their audience as they navigate repetitive rhythms, constantly developing melodies and a slowly increasing volume which only ceases once the audience reaches catharsis.

Nevertheless, we mustn’t take Buster Keaton (UK) dead seriously. They have no connection to the iconic actor, nor to the United Kingdom. Their name is set merely to hack the Budapest music scene, as foreign performances are much more visited in Budapest than local or domestic ones. Following their 2015 oncert album, a first studio album is expected this year.

Visualisation of the band’s concert is made by triplikat, Budapest-based creative technologists.