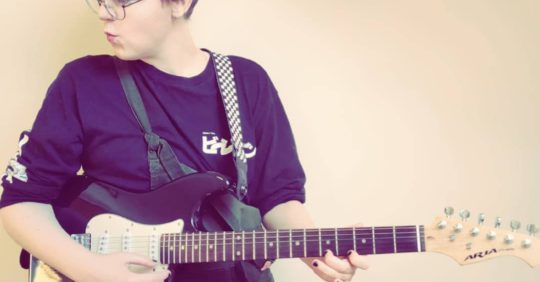 CHAINES (Cee Haines) is a composer and multi-instrumentalist based in Manchester UK, who writes surreal and fantastical electronica and electro-acoustic music. Their album, ‘The King’, was received with enthusiastic critical praise; it was ranked in FACT magazine’s top 25 albums of 2018’s first quarter, was made Boomkat’s album of the week, and Robert Barry of The Wire called it ‘vast in scope, rich in execution’. Their live set uses tracks from the record as a springboard for solo, semi-improvised electro-acoustic performance, which the Guardian has called ‘a mesmeric collage of ecclesiastical beauty and creeping dread’.

In addition to their solo electronic work, CHAINES has also worked extensively with the London Contemporary Orchestra. Commissions for the LCO have always been electro-acoustic in nature, using both small and orchestral scale ensembles with electronics, premiering works at venues such as The Royal Albert Hall (BBC Proms, 2018), Tate Modern (Uniqlo’s Tate Lates series, 2017) and the Roundhouse (Ron Arad’s Curtain Call, 2016). They have been in residency with SAY award winner Anna Meredith, and Grammy Award winner Imogen Heap, improvising, performing and producing audio and video.