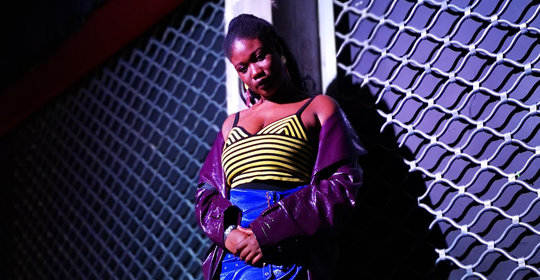 Hailing from Paris banlieues, Crystallmess operates from a place of generosity. Indeed, she’s a DJ, producer but also a writer and mixed media artist keen on shedding light on past and present subcultures.

Growing up in a French Caribbean and African household, but still sneaking out, letting her hair down and being a club kid has directly informed her approach as a DJ and producer, moving from abrasive zouk and dancehall to afro-trance and Detroit techno, whether she’s behind the decks for a Janus party at Säule/Berghain, Hyperdub’s monthly ø party at Corsica Studios, Yves Tumor’s Terms of Endearment’s party or Parisian local party CONCRETE. Her DJ style is eclectic yet cohesive, relying more on textures, sound continuum and narrative rather than genres while still rocking the dance floor.

Last December; she self-released her first EP Mere Noises oscillating between raw rave energy, dark dancehall and melancholic ambient receiving support with the likes of Kode9, Lee Gamble and Klein. She’s currently working on her next release on an international label and will debut as NTS Radio resident this winter.

On our December SHAPE platform show on London’s Resonance FM…