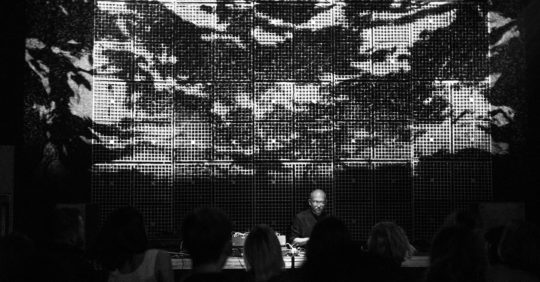 ELVI is the performing and producing entity of the Rigan disc jockey and curator Elvi Soulsystems. His current method is to use low fidelity field recordings as the only sound source – these are recorded sounds of urban and rural habitats, industrial sounds, the sound of the human voice (mainly his own). These recordings are manipulated using primitive modulation – space, repetition, speed, phasing via improvised performance. No instruments – electronic or acoustic – seem to feature in his music. His approach is to always create a tension between opposites – the raw and the pristine, the calm and the aggressive, the minimal and the oversaturated, light and dark. Some angle of the method is captured in a recording released via the newly founded digital label _toocontemporary this year entitled “PLUS ÇA TOMBE, PLUS C’EST LA MÊME CHOSE”.

Elviss Zants bears an extended experience in different collaborative work – from his duet with the artist formely known as Dunian – ELVI/DUNIAN to collaborating with artists of various disciplines – contemporary dance (for instance – co-authoring the piece “il cimento della struttura e dell’accento”), installation (“La Fin du Monde” created for the opening of the art centre Zuzeum in Riga) and other media (collaboration with American artist Alexis Blake and Russian singer Lisokot commissioned by the inaugural RIBOCA – “she who has no crown”). He’s developed a long-standing collaboration with the visual artist DEE – together they’ve curated the audiovisual event series House Purgatorio in Riga as well as created A/V shows within the projects MAXIMUM.TOUCH and PRESENT.REPRISE. Recently DEE frequently joins ELVI in concert format with the latest being a joint performance to support Riga’s club Serviss with a broadcast version of the live experience.

ELVI is the performing and producing persona of the Rigan…