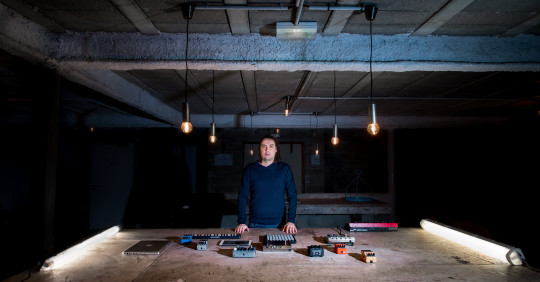 Fraction (Eric Raynaud) is a French musician, composer and producer of experimental electronic music whose work explores the boundaries of spatial sound composition within design of metaphysical immersive experiences. After the release of his first EP Superposition on the French label InFiné, Raynaud moved away from traditional music fields to focus on digital arts, working on complex stage designs and hybrid writings that combine visual, sound and physical media. In 2013, he developed DROMOS for Mutek Festival in Montreal, an impressive immersive performance that resonated with the blogosphere and subsequently had its OST released on InFiné. Since then, he has kept on merging 3D immersive sound with contemporary art and architecture, incorporating his questioning of themes that combine science and contemporary sociology. In collaboration with Louis Philippe St Arnault, he recently designed Entropia, a unique A/V performance involving a led sphere and ambisonics sound that has been featured by Creators Project, DesignBoom and described by XLR8 as ‘one of the most breathtaking and interesting presentations we’ve had the pleasure of witnessing in a long time’. With ‘Planète Humaine’, his last release on Infine (Oct 2016), he questions both the relation between physics and space, and the place of humanity in a human shaped environment. Even though the producer is used to blending images and emotions together that are human by nature, it’s through a real-time analogue process with a distortion pedal and an outflowing granular synthesis that Fraction is pushing his audience towards retro-futurist and dystopian landscapes.

Fraction (Eric Raynaud) is a French musician, composer and producer…