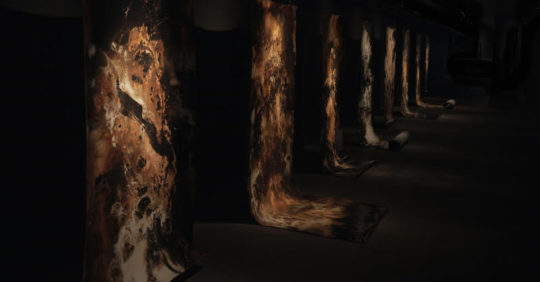 Paris-based Frédéric D. Oberland is an experimental multi-instrumentalist, composer, photographer and label co-owner of NAHAL Recordings. Founding member of avant-rock collective OISEAUX-TEMPÊTE, electro-shamanic and psych-noise groups FOUDRE! and Le Réveil des Tropiques, he has released on Sub Rosa, Hallow Ground, Gizeh Records, IIKKI, In Paradisum and NAHAL Recordings, producing film scores and soundscape installations. His music spirals into an uninterrupted stream of complexity, high detail and originality; an ongoing battle between heaving dissonance and harmonic breakthrough with an intimate sense of trance and momentum. By the sharp edge of light and sound, his last solo album « Même Soleil » is a haunting dialogue with photographer Gaël Bonnefon ; other recent collaborations include sonic works with Irena Z. Tomažin, Jerusalem In My Heart, Mondkopf, Christine Ott, Gaspar Claus, Richard Knox and Bérangère Maximin.

Irena Z. Tomažin is active as a vocalist, choreographer and performer in the fields of experimental improvised music and movement theatre, contemporay dance and perfomance. She also teaches voice and movement workshops nationally and abroad. Her music and her sound experimentation is an exploration of the landscapes of voice that include words, fragments of texts, (traditional) melodic singing, and other vocal techniques, including humming, clicking, and other sounds made with the mouth that pertain not (only) to the voice but also to the body.