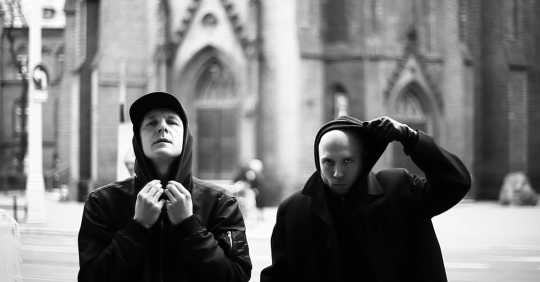 Robert Piernikowski and Adam Gołębiewski are two of the most respected artists in the Polish underground, both known for their boundary pushing music. Piernikowski is best known as rapper and electronic music producer, though he also works in theatre. He records solo, and as one half of the hip-hop duo Syny, introducing a new kind of sensibility to Polish rap’s dictionary. Gołebiewski is an acclaimed percussionist, improviser and musicologist, successfully working on expanding the possibilities of a drum kit. He has showcased his unique skills while working with such artists as Yoko Ono, Thurston Moore, Mats Gustafsson, Kevin Drumm, among many others. Together as Gryfy, they create a ceremonial narration out of coarse live electronics, grayscale industrial textures and aggressive percussion that ranges from subtle pointillism to raw onslaughts of sound–a kind of secular mass rooted in a certain ritualistic dramaturgy: cinematic, suggestive and meditating on both darkness and light. A new album is expected to be released in 2018.