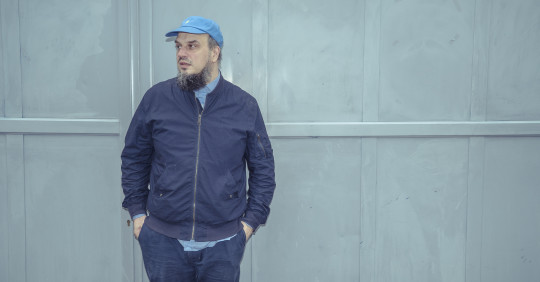 For nearly two decades now, Belgium’s Laurent Baudoux has been a pivotal figure in his country’s underground electronic music scene; he has been active as a member of groups such as Electrosold Collectif (alongside Mouse on Mars’ Jan St Werner) and working solo under a wide range of pseudonyms such as Sun OK Papi K.O. and Baleine 3000. Currently working under the name Lawrence Le Doux, Baudoux’s most recent releases for Brussels’ VLEK label have thrust him back into the international spotlight, receiving praise from the likes of Resident Advisor and Thump for his uniquely uplifting take on house and techno.

On releases such as the ‘Terrestre’ and ‘Pollution’ 12”s, Baudoux’s knack for creating otherworldly, dreamlike textures underpinned by pulsating, sun-soaked rhythms has marked him as one of electronic music’s true originals. And if Baudoux’s music mesmerises on record, the effect is even more pronounced live, where his utopian electronics are further bolstered by live guitar and bass to dazzling effect.

Listen to the latest episode of SHAPE Radio – the…