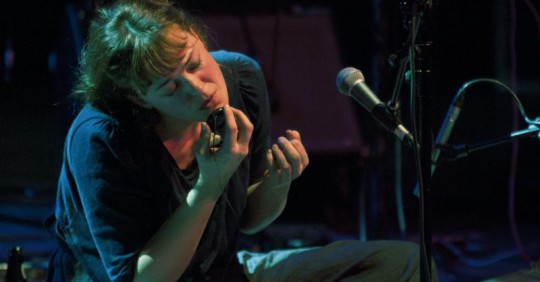 Completely alone on stage, surrounded by kalimba, kazoo, zither and various electronics to sample and manipulate her voice, she’s always a fascinating experience in concert. Mari Kvien Brunvoll has a unique ability to fire up an audience, and has the ability to capture the listener into her universe and never let you go. Her music is a personal expression that straddles jazz, electro pop, acoustic blues and folk music from different corners of the world. Mari Kvien Brunvoll from Molde, Norway, has been described as “an exceptional talent”, and has been touring extensively as a solo artist since 2008. But it wasn’t before 2012 that she released her first solo album on the label Jazzland Recordings. The album was nominated for the Norwegian Grammy in the open category. “Everywhere You Go”, from this album, earned her a new audience when the ubiquitous musician and DJ Ricardo Villalobos discovered the song and created a 28 minute long remix of it. While touring solo, Mari has also been touring and recording with several other projects, duos and trios, and she’s been working in with dancers, authors and actors.

Mari Kvien Brunvoll’s music is a personal expression that straddles…