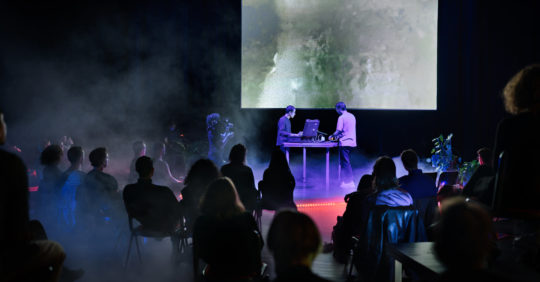 AS ABOVE, SO BELOW A/V live performance by Mark IJzerman (visuals) & Sébastien Robert (sound)

DESCRIPTION
‘As Above, So Below’ explores the changing landscape of La Araucanía region in south-central Chile through live visuals and sound. This audiovisual performance probes into the dualism of man’s relationship with nature via sonic research made by Sébastien Robert, French interdisciplinary artist and investigative visuals created from satellite imagery as well as microscopic and drone footage by Dutch media artist Mark IJzerman. During a residency in Chile they researched the logging industry that has been eroding the biodiversity of the region, causing disruption to the ecosystem.

CONTEXT
‘As Above, So Below’ specifically focuses on the shrinking amount of old-growth forest and biodiversity versus the increase in eucalyptus and pine plantations in La Araucanía, in which the indigenous Mapuche are about a third of the total population. Mapuche activists have allegedly been burning crops, blocking roads and setting forests ablaze in an attack on the big corporations that have taken over their ancestral lands in the last 50 years. The activists claim that the logging industry’s introduction of water-hungry pine and eucalyptus trees since the 1980’s has damaged the ecosystem, as well as hurting local agriculture by reducing the supply of available water. This has lead to a decreasing amount of jobs and thus local poverty. While forests in Chile are increasing, these are mostly genetically engineered trees meant for the timber industry, with forests specifically grown for paper manufacturing and timber.

‘Emerging Threshold’ is the recorded counterpart to ‘As Above, So Below’. Released by the Belgian Meakusma label on April 1st, 2021, it is an album rich in both intimacy and wideness of scope.