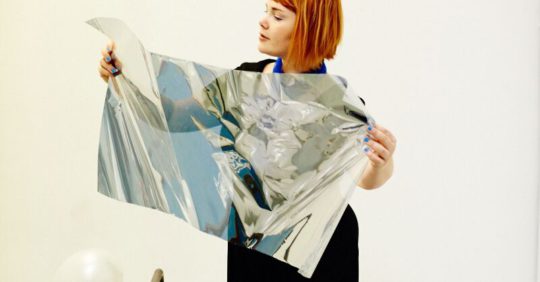 Sally Golding is a British-Australian artist whose work considers participation and liveness in audiovisual art as a mechanism for shared experiences and dialogues within technological contexts. Golding’s audiovisual performances play upon the politics of listening and seeing – edgy and intense in nature, they unravel in the style of a ‘happening’ to incorporate aspects of the performance space, blending discordant sonics and harsh lighting to investigate the social potential of opto-sonics.

Mixing innovative ‘darkroom compositions’ that rework the potential of the optical sound system as a site for psychoacoustic radio play; own lathe cut audio recordings inscribed onto silver foil; and live interference and generative feedback systems using amplified lighting and light sensitive audio including repurposed camera flash units and PA shattering laboratory strobe lights, Golding’s sounds are intriguingly indivisible of the materials with which they are produced. Defying categorisation, her live sets draw in her own sampled voice and interjections of feedback through a layered impasto of sound and light.

Golding’s participatory installations have been shown at the Institute of Modern Art (AU), Contemporary Art Tasmania (AU) and South London Gallery (UK), and are audiovisual compositions which spatialise the viewer’s presence via reflection and image capture using generative software sequencing, bringing into question states of empathy and intimacy to reflect upon the multiplicity of contemporary portraiture in the digital age.

Golding has been featured in The Wire, and by publishers Millennium Film Journal, Tate Modern and Palgrave Macmillan, and received an Oram Award 2017 (New BBC Radiophonic Workshop/PRS Foundation) for women innovating in sound and creative technologies. Heavily involved in the international community, Golding is also the curator of the discursive and sensorial event and festival platform Unconscious Archives (LDN).

Sally Golding is a British-Australian artist whose work considers participation…

Listen to a special hour-long mix by audiovisual artist Sally…