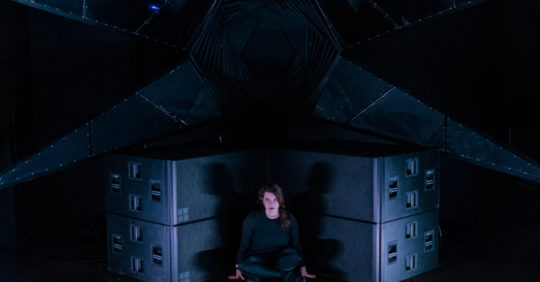 Works and lives in Berlin
(b. São Paulo)

Stefanie Egedy investigates sound as a composer of conceptual pieces, music, commissioned works, and dance music. Currently, she is focused on researching possibilities with low frequency sound, bodies and subwoofers. Her artistic practice stems from installations to live performances as sonic propositions. Sub-bass, bass, infrasound, subwoofers, and their capacity to make themselves present in a space, are the foundations of her work. Alongside the possibilities of interaction between human/architectural bodies and sound waves, using field recordings, analog & digital synthesis. Besieged by this scenario, Egedy articulates the cross-over between sonorous and musical language to investigate communication between beings.

She co-runs the label COISAS QUE MATAM (THINGS THAT KILL), researches the relations between light and sound with Camille Laurent, and is Executive Operations at Monom, Berlin’s Center for Spatial Sound. Her academic investigation of the political impacts of social and technological acceleration during her bachelor’s in Public Administration and Philosophy resonates with her creations.

Stefanie Egedy investigates sound as a composer of conceptual pieces,…