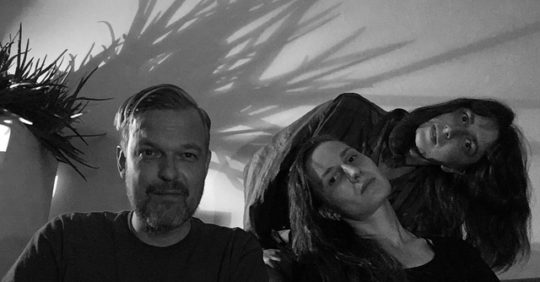 The collaboration is resulting from the commissioned performance at the Easterndaze x Berlin Festival 2016 curated by Lucia Udvardyova.

WIDT is an audiovisual collaboration of two sisters – Antonina Nowacka (voice/processing) and Bogumila Piotrowska (live visuals). Works of duo appear as oneiric visions built up with a use of abstract, operatic vocalization, flowing in the jungle of psychedelic visuals, created in real-time from scratch with complex forms of video feedback. An unique phenomenon oscillating between concert, performance, installation and video art. WIDT had released two audiovisual albums: POINT#3 VHS (2015, Pointless Geometry) and WIDT cd/dvd (2016, Zoharum), both appreciated by the renowned British magazine The Quietus. Since 2016, the duo had performed at the most significant festivals of underground and avant-garde music like KRAAK (Brussels) and Counterflows (Glasgow), in the London’s Café OTO, BOZAR Art Centre in Brussels, on the festival Przemiany in the Copernicus Science Center in Warsaw, UH Festival in Budapest, Unsound Festival in Cracow; among artists such as Hermann Nitsch, Charlemagne Palestine, David Behrman, Księżyc, Pierre Bastien, Sue Tompkins, Christoph De Babalon, Benedict Drew, Johannes Bergmark, Raphael Roginski, Francesco Cavaliere.

CHRISTOPH DE BABALON, whose excellent 1998 album “If You’re Into It, I’m Out of It” was recently reissued to wider audiences, is known for tripping rhythms, dark wide spaces and eternal melancholy. In 1994, when the term ‘breakcore’ did not exist, his first record and those that followed were extensively played by BBC-DJ-legend JOHN PEEL. He then began working with ALEC EMPIRE’s Digital Hardcore Recordings (DHR) where in 1997 he released the album “If You’re Into It, I’m Out Of It”. DHR still say that it remains their most important release and it influenced a multitude of breakcore youths up to this day. RADIOHEAD’s THOM YORKE considers it ‘the most menacing record’ he owns and took Christoph along on the 2001 Radiohead southern European tour leaving tens of thousands confused by his introspective ambient music.

He then withdrew from public and pursued composing for theatre and dance, to gather new experiences, while also releasing extreme electronic music by artists including MERZBOW, SOMATIC RESPONSES and ZBIGNIEW KARKOWSKI on his own record label CROSS FADE ENTER TAINMENT (CFET).

In 2008 he resurfaced with his most complex and extensive work “Scylla & Charybdis” incorporating vocals of singers HANAYO and ALEXANDRA VON BOLZ’N into dark musical poems of epic length. This record also marks the first time he worked with British cover artist IAN LIDDLE. Two Albums “A Bond With Sorrow” (Tigerbeat6) and “Short Eternitites” (Love Love) followed over the next years. In 2017, the acclaimed “Grim Zenith EP” on Hamburg, Germanys VIS label further brought him back to hypnotic jungle Beats with intense melodramatic atmospheres. It is considered his best release to date by many old and new fans.