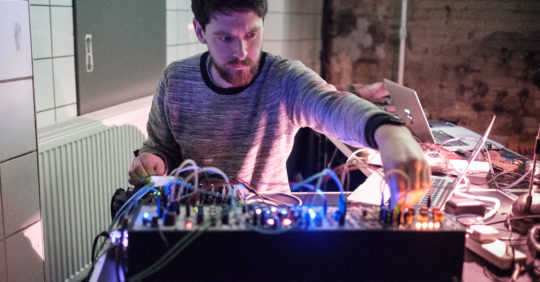 Tim Shaw is an artist and musician interested in the relationships between site, sound and technology. His practice is concerned with the many ways people listen, specifically how listening environments can be constructed or explored using a diverse range of techniques and technologies. His work is anchored in the creative use of field recordings and he often appropriates recording and communication technology to consider how these devices change the way we experience the world. Tim presents work through musical performances, installations, walks and site-responsive interventions.

In performances Tim improvises with field recordings, microphones, modular synthesisers, sculptural loudspeakers and resonant sound objects which, when combined, create layered listening environments. He uses a variety of self-constructed technologies to playback and manipulate his recordings. His compositions incorporate elements of uncertainty and indeterminacy processed through room acoustics, computational systems and networked infrastructures.

Tim Shaw is an artist and musician interested in the…