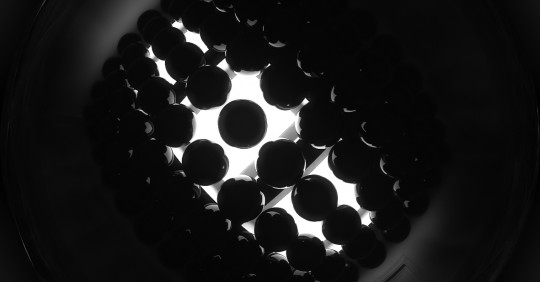 It is comprised of a matrix of 99 balloons composing an immersive yet intimate performance. While being inflated, the balloons surround visitors to create an intense physical, sonic, and visual experience.

NEUNUNDNEUNZIG (99) is a dark field of intensities where sound, light, and objects are inhaling, exhaling, and pulsating in a space that is shrinking and extending, thus creating a highly intensive, even claustrophobic psycho-physical and socio-spatial experience that mirrors the current conditions of our society.

NEUNUNDNEUNZIG (99) is inspired by “99 Luftballons” an anti-nuclear protest song by the German band Nena.

Martin Bricelj Baraga creates large scale artworks in public spaces and unusual architectural contexts. His installations, futuristic monuments, and situations research the relationship between humans and machines, focusing on the social aspects of popular culture and the political dimensions of our mediated realities. In the past few years he has been increasingly working with sound, especially in his collaborative works with Mark Spendlove aka Spatial (Dental Metal, 2015) and Andre Goncalves (Darkstar 2.0, 2012). He has exhibited or performed his works at ICA (London), SONAR (Barcelona), Columbia University (New York), FACT (Liverpool), and TodaysArt (Den Haag). He is also the founder and director of MoTA- Museum for Transitory Art (Ljubljana).

Olaf Bender is a musician interested in the physicality of sound. In 1996, he co-founded the Raster-noton label and art platform with Carsten Nicolai with whom he also collaborates with in the Diamond Version project and in the Signal trio with Frank Brentschneider. He is most known for his work under the Byetone moniker, through which he made a significant impact on the sound of modern electronic music. Bender creates his music digitally by assembling sine tones to complex sound fabrics, digital clicks, and effect plug-ins creating a distinct post-techno sound and audio-visual experiences on the border between club culture and sound art.

Both coming from ex-communist countries, Baraga and Bender are working on a series of immersive experiences and installation works joined by their common interest in minimalist aesthetics and use of technology in sculpture.

99 is a space where both artists share their experience of political transition from one system to another and through it release all the hidden forces and oppressions of modern times.