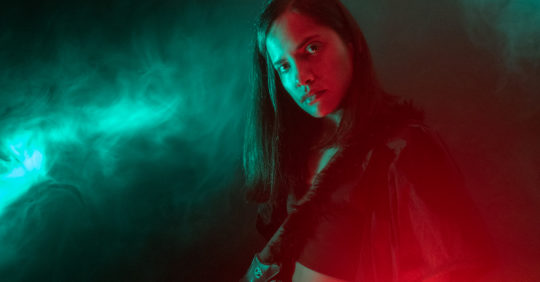 Alejandra Cárdenas Pacheco (also known as Ale Hop) is a Peruvian-born artist, researcher, and experimental musician based in Berlin. Her body of work includes live shows, record releases, sound and video artworks, research on sound and technology, and original music for film, dance and theater projects.

She began her career in the 2000s in Lima’s experimental and underground scene. In 2012, following several years of participating in different pop and electronic bands, she finally started her solo project after performing alone for the first time in Boiler Room, during her residence at the Red Bull Music Academy New York. In her live performances, she merges the physical qualities of sound with raw emotional performative states. She crafts layers of sounds by blending a complex repertoire of guitar techniques processed with synthesis devices, to create a music of great intensity.

Her studious approach to the subjects covered in her albums and pieces is constantly informed by her background as a researcher. She completed a BA in Art History, her master’s in Sound Studies, further studies in History of Science and Technology, and is currently pursuing a PhD at Berlin University of Arts. She also directs the editorial platform Contingent Sounds, which aims at facilitating critical thought, artistic research and experimental formats on the practice of listening and relationality grounded in the global south.

Alejandra Cárdenas Pacheco (also known as Ale Hop) is a…