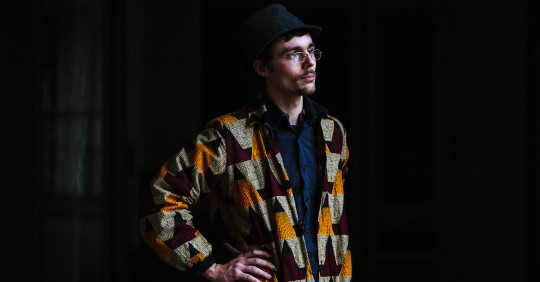 Andi Stecher is an Austrian born and Berlin based drummer, percussionist and electronic musician. His current focus lies on solo compositions and live sets.

In June 2015, Stecher released his first solo album austreiben/antreiben through Heart of Noise Edition. It is a personal take on mask-wearing traditions/pre-christian alpine traditions which are widespread all over Europe. The main characters of these mostly wintertime traditions are hybrid/anthropomorphic figures, embodied through people adorned with bells and wrapped in natural materials such as moss, animal skins or branches. Stecher’s main interest does not lie in a direct tonal translation of these characters and their appearance. Rather, his focus is concentrated on certain characteristics and topics that these creatures embody and express or act out. Motifs and themes of transformation, moments of transition and passage (eg. winter expulsion ), relationships between humans and nature, as well as crudeness and fury, coarseness, death and fertility are placed into tonal form. He works with a raw, undefined palette of sounds as well as repetitive rhythm to create his compositions.

Andi Stecher is an Austrian born and Berlin based drummer,…