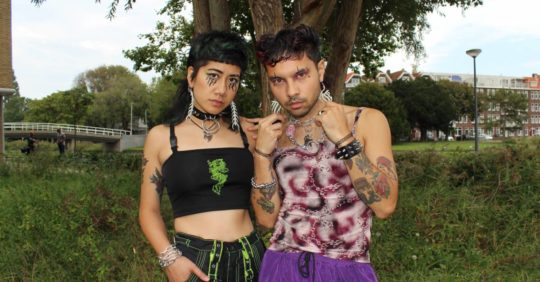 Animistic Beliefs were born to perform, they live to play live and they thrive on a stage. Hailing from Rotterdam, they flourish in any dark, strobe lit basement during the supernatural witching hours. It is in these settings that they breathe new life into electro by twisting, warping and contorting it into contemporary and spellbinding, occult structures. They tinker with fluid melodies and rehash them into new entities, experimenting with textures whilst effortlessly deviating from meditative to manic, destructive to danceable in an instant. With a look as stylish as their sound, the young pair reimagine UK sounds, IDM intricacies and Detroit mechanisms via their impressive collection of vintage gear and DIY modular synths. They offset fast paced robotic drum-machine patterns with softer melancholic timbres and dehumanised vocals from other dimensions.

They employ a proto-futuristic palpability to their thumping live sets, utilising their organic chemistry to create improvised beats plucked from thin air and converted into other-worldly amalgamations. They have already played in critically acclaimed venues and festivals such as De School, Griessmuehle, Rewire, on NTS Radio and also at a secret rave in Zurich which was mysteriously curated by illustrious fashion brand Gucci. As well as their extraordinary live shows, Animistic Beliefs continue to do unfamiliar things with familiar sounds in the studio.

Their debut EP Sinuous Gullies released on Solar One Music’s sub-label Between Places sold out immediately, as did the repress. Add to that a split cassette with Legowelt as Audiosport 8, their Molucca Quake EP on Cultivated Electronics, and you get a transparent picture of the duo’s unabated work ethic and crystalline production integrity. In 2019 the duo released their debut album Mindset:Reset which showcased their multifaceted style and combined their fascination for both technology and mythology. Both the music and artwork were highly praised by various media outlets and DJ Mag named it the release of the month. This year Animistic Beliefs will be debuting their A/V show ‘CACHE/SPIRIT’ in collaboration with new media artist Jeisson Drenth. If you act quickly, there is still time to jump on board the good ship before it once again sails off over the horizon into yet another another alternate reality

Animistic Beliefs were born to perform. They live to play…