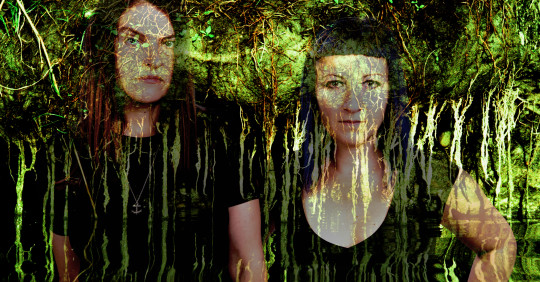 When Irradiation and Chra teamed up as representative musicians for Pasajera Oscura, they didn’t know what to expect. They were invited to do some shows in Vienna, based on sinewaves, dark beats, low frequencies and synthesizer improvisation. A long break followed, which both musicians used to record their solo works.

In autumn 2014, Pasajera Oscura got an invitation to play at a little festival organised by skug music magazine. For this event, Irradiation and Chra created a 4-channel live set, and during rehearsals decided to continue to work on their tracks in 2015 – and start to record some tracks for a compilation on Comfortzone (Chra’s label) and an EP together.

Chra is the alter ego of Viennese author, DJ, music addict and radio/TV presenter Christina Nemec. After a period experimenting with low frequencies and noise effects, chra started to work on more club-friendly beats, using sinewaves processed through a tape recorder and other analogue and digital tools to allude to landscapes, territories, silence and extraordinary and extreme situations. She is also a member of Shampoo Boy and SV Damenkraft.

Vienna based musician/DJ Irradiation stands for atmospheric, dark flavored electronic music with a thumping beat. She has released on her own imprint TEMP~Records, female pressure open:sounds, or on net labels like MIR music and kreatur.

Christina Nemec is a multifaceted musician, one half of the…