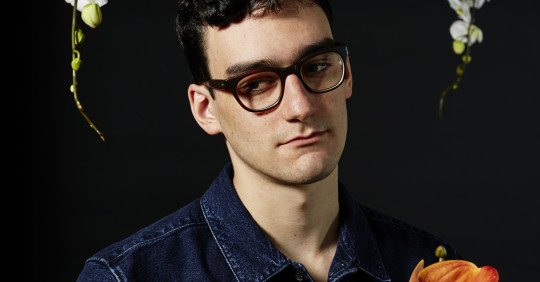 One afternoon two years ago, Danny L Harle composed a song to play in his DJ set; a huge fan of 1990s dance tracks such as Haddaway’s What Is Love and Corona’s Rhythm Is A Dancer, he wanted a song of his own to play alongside them. The result was Broken Flowers: both a paean to the past, and the sound of something modern.

Now Broken Flowers is reappearing, lightly polished, to head up Harle’s new EP, a statement of intent from the London-born 25-year old composer and producer.

The new EP is one of the first full releases under the PC Music label deal recently struck with Columbia Records. Harle has long been affiliated to the label and works regularly with his friend Alex ‘A. G.’ Cook, PC Music’s founder.

With its electronic sheen and avant-pop sensibilities, Broken Flowers is certainly a feather in PC Music’s cap. But the EP is also progress for a distinctly individual artist. “Pop music in itself is super-crazy,” says Harle.”It’s on the brink of insanity. And what I have always been hoping to do is just push it that little bit further, to complete insanity.”

The EP is a first step in that direction. Broken Flowers is followed by Forever, which Harle considers its rival in melody and impact; then comes Without You, a more complex construction, less up-tempo. The final track is Awake For Hours, a heady rework of Broken Flowers.

For Harle, Pop is the genre which “makes so much sense” in this day and age, more than any other he has worked in. It’s been a meandering journey up to this conclusion. His first musical instrument was the slap bass: this set him on a path taking in funk jams, eventually playing on dinner cruises; then getting into experimental jazz; before embarking on a degree in music at Goldsmiths.