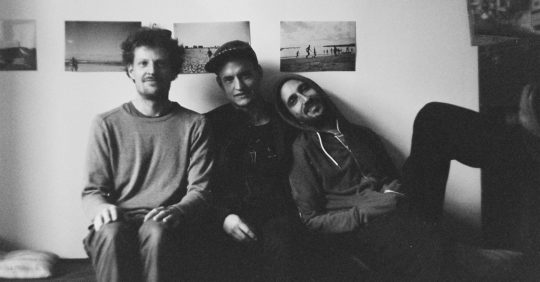 What turns a one chord song into a spiritual practice? What connects improvisation with gang vocals, sufi rave music to tape loops? A music, far beyond form and emptiness. Dorota was founded in 2009 by three Hungarian musicians, Aron Porteleki, Daniel Makkai and David Somló. With the success of their first untitled adventurous art-rock album, and their second triple(!) album Frik the band has become a major player in the experimental music scene of Budapest, and is celebrated as one of the most unique contemporary bands in Hungary. Their third album released last year titled Solar the Monk was selected ‘Album of the year’ in 2019 by leading Hungarian music magazine Recorder and landed on the top of other national album lists as well.

Dorota’s creating method is always building around a mystical fictional space. “If we were to imagine the band’s recordings with visionary landscapes, while the first album was a North American road trip, our second album, Frik screened between a Nigerian internet cafe and a foggy mountain, the home of our third album, ‘Solar The Monk’ is somewhere out of existence Georgian-Iranian-Mongolian border. Solar The Monk is a retreat, a reflection, the exploration of new ways and forms of existence in a world rushing to the end. Following the practice of earlier records on free improvisation, Dorota’s new album blends raw and powerful punk rock sounds with Sufi, Berber, Mongolian, Buddhist influences. Despite its diversity, the nearly hour-long album Solar The Monk manifests in a coherent listening experience.