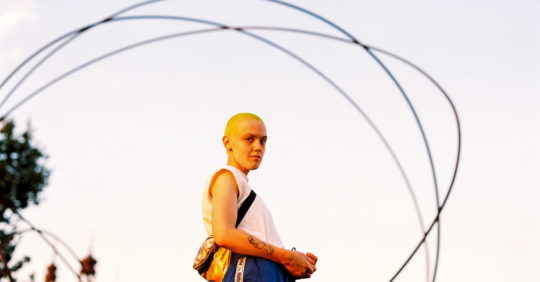 Evil Medvěd is the project of Prague-based Faolán McGowan. His live sets are loaded with energy, chaotic and intricate, but playful, tender and personal at the same time. They first developed an interest in the modular way of thinking and making music through Bastl Instruments. Their approach is both an exploration and excavation of sounds from the analog system. He began to play live in 2018 and released his debut record in 2019 on the Prague label RedforColourBlind.

His live sets are only a part of his practice. He often holds workshops at Synth Library Prague, a feminist intitution commited to the opening access to music technology as well as presenting a platform for critical thinking. Their work with Trigger collective focuses on mutual care, community-led organising with an aim to support Women* incl/and trans* people in the Prague music scene.

Faolán often collaborates with Keya Singh (b. Mumbai, 1995), a visual artist focusing on video and performance art. She has exhibited and performed her work across galleries and festivals in the Czech Republic since 2018. In 2020, she performed with Evil Medvěd at Lunchmeat Festival (Prague). Her work explores her own identity as it continues to morph into an amalgam of the culture she comes from, the people that raised her, the content she consumes as an adult, and her present environment.

The restless soul possessing the modular gear becomes a malevolent spirit with an explosion of chaotic energy, kicking the floor into anaerobic, staccato dancing. Despite the early set time we leave coated in sweat and breathless, words whisked away by the exhilarating act.’