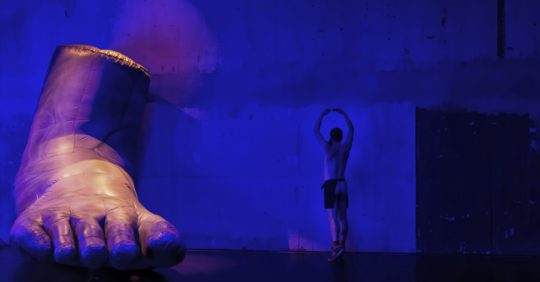 Frédéric Gies is a dancer and choreographer based in Sweden.

Oscillating between clockwork composition and the intensities and chaos generated by dancing bodies surrendering to the desires and forces that traverse them, Frédéric Gies’ dance pieces bring to the forefront the capacity of dance to speak without having to commit to any aboutness. Drawing from their former training in ballet, their encounter with specific trends of contemporary dance at the beginning of the 90s, their dance floor experiences in techno clubs and raves and their study of somatic practices, Frédéric Gies approaches form as possibilities rather than constraints. Their dances weld forms seemingly foreign to each other, recycle and pervert dance history and heritages. They playfully collapse the distinction and hierarchies between erudite and popular forms of dance. Their dances also address and actualize politics in a non-representational way, beyond the appearance of bodies. In their pieces, bodies as the instigators of movement don’t reinforce identities but excavate the complexity of their layers. Frédéric Gies’ work is also tightly connected to techno music and infused with references to clubbing and rave cultures. This is widely enabled by their long-term collaboration with the dj and producer Fiedel.

Frédéric Gies started their career as a dancer beginning of the 90s in France. They danced with choreographers such as Daniel Larrieu, Olivia Grandville, Jean-François Duroure, Odile Duboc, Bernard Glandier and Christophe Haleb. During this period, they started creating their first pieces. In 2004, they moved to Berlin and in 2006, they created the piece Dance (Praticable), which encountered an international success. As they moved to Sweden in 2014, they initiated their work with techno music and started to develop their practice Technosomatics. They present their works in various contexts, including dance venues, music festivals and museums. Their latest works include the seven hours performance Dance Is Ancient, Tribute (commissioned by Weld Company) and Queens Of The Fauns, for which Fiedel created a live set. They also danced in pieces of Cristina Caprioli, Jefta van Dinther, Alice Chauchat, Isabelle Schad and Antonija Livingstone. Between 2012 and 2018, they were head of program of the MA in choreography at DOCH-SKH.