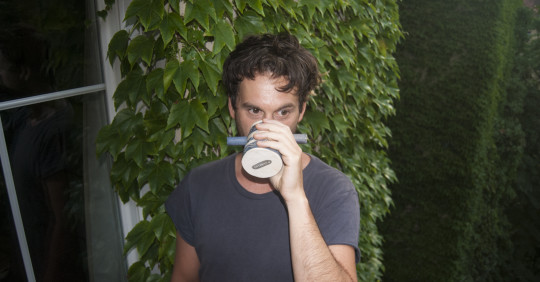 Gosheven is the solo project of Bálint Szabó (Budapest), member of 12z (they released two records on Nicolas Jaar’s label Other People) and curator at Trafó House in Budapest. “Leaper” is his first solo adventure, released in May 2017 on the visionary Opal Tapes. For his breakthrough Bálint puts in use the several years he spent studying different tuning systems for electric guitar. He developed a unique electric guitar with strings that can be placed in the stereo field to further enrich the already unusual sounds of the retuned guitar. Inspired by some of the greatest American minimalists, such as La Monte Young and Terry Riley, and Italian Renaissance composers (“Unbalanced Holiness” is based on a composition by the great Giovanni Maria Trabaci), he built some beautiful and absorbing sound harmonies that travel through emotions and the senses of a full metamorphosis: the idea of a “caterpillar turning into butterfly” is a metaphor for his detachment of the male ideal that surrounded him throughout his education. Leaper is a masterful take on drone and ambient sounds with enriched pop sounds. Gosheven premiered Leaper at UH Fest (Budapest) in October 2017.

Leaper was featured in The Wire’s best albums of 2017.

Gosheven is the solo project of Bálint Szabó, member of…