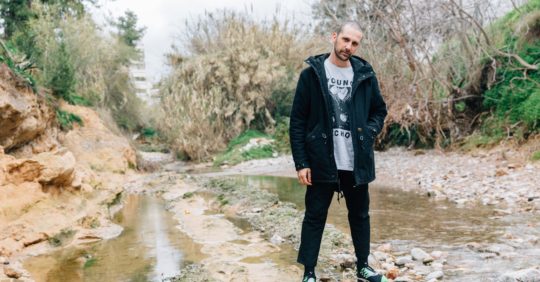 Dimitris Papadatos aka Jay Glass Dubs was born in the USA in 1981 and subsequently moved to Greece where he grew up. Though his work as a composer, musician and sound artist he has become one of the leaders in experimental dub electronics and a core member of the Bokeh Versions squad.

His work primarily focuses on spirituality and transformation and is an exercise of style focusing on a counter-factual historical approach of dub music, stripped down to its basic drum / bass / vox / effects form.

Jay Glass Dubs is a prolific producer and has released a diverse and expansive body of work on the likes of Bokeh Versions, The Tapeworm, Anòmia, DFA Records, Ecstatic, and Berceuse Heroique. He has also collaborated on critically acclaimed releases with Not Waving (as Not Glass), Guerilla Toss and Leslie Winer as well as releasing remixes for artists such as How To Dress Well, Jabu, Maximum Joy and more for labels such as Domino, Young Echo, ESP Institute and forthcoming on Smalltown Supersound. Dimitris’ work has been presented in various international institutions and festivals including Berlin Atonal, Meakusma Festival, Documenta14 and BBK Bilbao.

He has performed in venues and spaces such as Macao in Milan, Portikus in Frankfurt, Worm in Rotterdam, Arkaoda, Kraftwerk, HKW, Paloma and Echo Buecher in Berlin, Cafe OTO, Corsica Studios and Rye Wax in London, Soup Kitchen in Manchester, Salon Des Amateurs in Dusseldorf, La Java in Paris among others while he has recorded broadcasts for stations such as NTS Radio, WFMU, dublab and Resonance FM. His music has also been featured in various radio shows including BBC Radio 3’s Late Junction, NTS Radio, WFMU, Rinse France, Resonance FM, Independent Music Podcast, Dublab and Tiny Mix Tapes’ Tabs Out Podcast to name a few.

This month on our SHAPE platform show, we talk to…

Dimitris Papadatos, aka Jay Glass Dubs, was born in the…

Maintenant Festival’s Arnaud Briens has made a special mix composed…