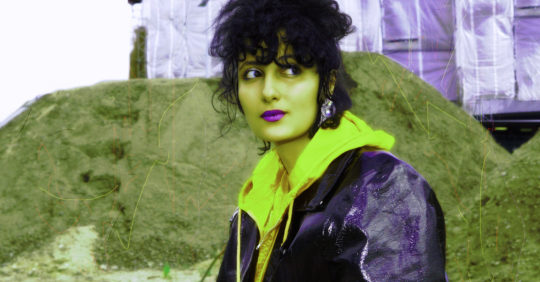 Jessika Khazrik’s computational, techno-political and literary practice nurtures a multiplicity of voices. Scavenging sounds and text from ancient pharmacopoeia of healing, online and on-site detritus, citizen media, and militarised ads and technologies, Khazrik’s sonic scapes intimately investigate the techno-political premises of the military economies we inhabit or forget. Often born out of vocoded collaborations with neural networks skewed with hard-edged Arabic rhythms and a very dynamic techno, Khazrik festively uses spaces of congregation—such as clubs, museums, her house, quarries, and the internet—to search for new, locally entrenched universalities that could collectively respond to the dystopias of our current time. Khazrik’s indisciplinary practice as artist, writer, technologist, producer and DJ ranges from composition to machine learning, performance, visual art, ecotoxicology, cryptography and history of science and music. Over the last 5 years, she has been critically exploring nascent machine learning tools for speech synthesis, vocal encryption and DJing. Khazrik also composes the score of the GEOCINEMA project and often collaborates with artists and labels on album art and text.

Having grown up in the Armenian jazz scene in Lebanon, Jessika Khazrik’s deep-seated interest in music, technology, politics and literature was kindled at a very young age. Beginning to perform in the Beirut metal scene at the age of 14, she soon took on DJing a few years later while performing in different settings. Khazrik holds BAs in Linguistics and in Theatre from the Lebanese University and a MS in Art, Culture and Technology from MIT where she was awarded the Ada Lovelace prize. She has been a fellow at Home Workspace Program in Ashkal Alwan, a fellow at the Digital Earth and guest faculty at HfK Bremen.

Jessika Khazrik has performed at CTM Festival, Ballroom Blitz, ALL, Museum of Modern Art Warsaw, Silent Green, Stanford University, Les Urbaines, HKW, Theater Der Welt, quarries, her house, secrets, among others. Her sound installations, sculptures and prints have been presented at the Kunsthalle Wien, Times Museum, Sursock Museum, ar/ge kunst, Beirut Art Center, UCSC, RCA, Arab Image Foundation, among others, and her essays and short stories have been published in over 5 languages in edited anthologies, Bidayat Journal, Kohl Journal, The Funambulist, Almodon and Ibraaz to name a few. She relocated from Beirut to Berlin in 2020.

Scavenging sounds from online and on-site detritus, trans-millennial compendia of…

Hear our Best of mix focusing on our current artist…

The 20th edition of Insomnia Festival wrapped up with a…

Johanna Hedva is a Korean-American writer, artist, musician, and astrologer,…