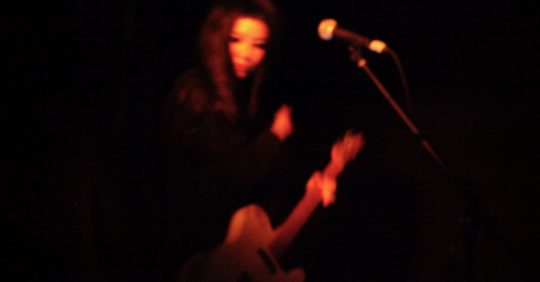 Johanna Hedva is a Korean-American writer, artist, musician, and astrologer, who was raised in Los Angeles by a family of witches, and now lives between LA and Berlin. Hedva’s practice cooks magic, necromancy, and divination together with mystical states of fury and ecstasy. They are devoted to doom as a liberatory condition, deviant forms of knowledge, and the way a voice can unmake the world. Hedva’s work, no matter the genre, is different kinds of writing, whether it’s words on a page, screaming in a room, or dragging a hand through water.

Hag blues, cave music, mystical doom, and intimate metal are some of the genres that articulate Hedva’s music. Their live performances are as much a cathartic grief purge as a droned-out metal colossus that summons the holy spirit. They are informed by the Korean tradition of Pansori singing, which demands rehearsal next to waterfalls in order to ravage the vocal cords, as well as Keiji Haino, Sunn O))), Nine Inch Nails, Diamond Galás, and Sainkho Namtchylak.

Their latest album, Black Moon Lilith in Pisces in the 4th House, was released on crystalline morphologies and Sming Sming, on January 1, 2021. It is a solo electric guitar and voice performance that embodies cosmic darkness, the song of whales, the sound of the void, and deep time. It began as a live performance in 2018, which Hedva toured throughout Europe and the States.

Their EP, The Sun and the Moon, was released in 2019; two of its tracks were played on the moon. ArtReview called it “a black slurry of rich, harsh noise, industrial beats, and grainy samples. Like much of Hedva’s work, the album is a celebration of darkness, an evocation of the swampy zone where the sacred and profane meet.”

Hedva is also the author of two books, the novel On Hell (2018) and a collection of poems, performances, and essays, Minerva the Miscarriage of the Brain (2020). Their work has been shown in Berlin at Haus der Kulturen der Welt and Institute of Cultural Inquiry, and at Klosterruine for their first European solo show, God Is an Asphyxiating Black Sauce, in summer 2020. They have performed or exhibited at The Institute of Contemporary Arts in London, Performance Space New York, the LA Architecture and Design Museum, and the Museum of Contemporary Art on the Moon. Their writing has appeared in Triple Canopy, frieze, The White Review, Lithub, Die Zeit, Ignota, and is anthologized in Whitechapel: Documents of Contemporary Art. Their essay “Sick Woman Theory,” published in 2016 in Mask, has been translated into seven languages.

Johanna Hedva is a Korean-American writer, artist, musician, and astrologer,…