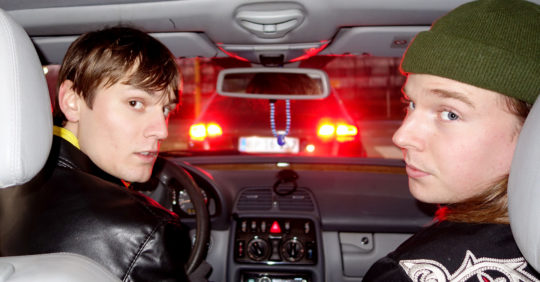 Fracturing their way out of the snoozy 4/4 paradigm to flourish in the all-engulfing rave hyperspace, Lyra Valenza create pulsating tapestries of mischievous electronics that resonate deep within shape-shifting webs of hybridized jungle, footwork extravaganza, high-velocity hardcore and glassy, future-ready atmospherics.

Behind the Latin-sounding moniker of Lyra Valenza actually hide Jens Konrad and Hjalte, aka the Copenhagen-based duo at the helm of cross-dimensional travellers’ haven, Petrola 80. Having released their debut, ‘Synkronudspring I Tomt Bassin’ [Synchronized Dive Into an Empty Pool], on their own label in 2017, the pair went on to explore further trance-y grounds on their noteworthy followup “Scan, Deliver” for Stephen Bishop’s ever-daring imprint, Opal Tapes in 2018.

Continuously blurring the lines betwixt straight out dancy motifs and mutant FX alterations from outer space, Lyra Valenza’s trouble-brewing, sample-heavy mashups have found an even brighter echo in their smashing live performances, allowing the duo to fully expand the textural and rhythmic wealth of their studio experimentations into the world of flesh and bone interaction.

This eagerness to build a full-blown post-sci-fi’esque universe and distinctively vibrant live experience out of a fragmented scope of influences was to be brought to another level in their outstanding A/V collaborations with French video artist Camille Doussy, also responsible for their music videos, which the crowd of the infamous Roskilde Festival has had the chance to witness in 2018, and that the rest of the world shall hear more of very soon.