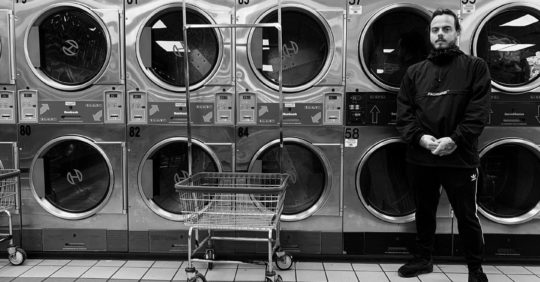 Oliver Torr is a Prague based electronic and acoustic composer, producer, audiovisual artist and label owner. Since having graduated from the British & Irish Modern Music Institute in London, where he studied under well-established composer and instrument programmer Phelan Kane, he has been pursuing various activities revolving around sound, art and music.

Genre-wise, Torr is trying to blur the lines between eclectic dance music from all corners of the world and the experimental avant-garde musicians that he admires, using various tape machines, field recorders and synthesisers. With his artist collective and label XYZ project, which he co-founded in 2014, he hosts a wide range of listening concerts, meditative sound sessions, parties, an Radio 1 show and gallery projects, along with issuing cassette, vinyl and digital releases of friends of the label.

In 2017, Oliver moved to Berlin to continue his studies with a masters degree in audiovisual arts, but instead he found a passion working at Berlin’s Patch Point synthesiser shop, learning to solder and make instruments by designers such as Serge Tcherepnin or Peter Blasser. Even though he was inspired by the city, he felt like he could bring his ideas back to Prague, where he always felt most at home. When Bastl Instruments’ shop Noise.Kitchen moved to Prague, it felt like the right move to start putting things in motion there. Now solidly based in Prague, he is a regular addition to line ups at various venues, playing either live, DJ sets, or free improvisations, now starting to concentrate on marathon-like time slots (in the free improv’s), with the latest project being around 5 hrs in collaboration with David Herzig and Aid Kid, where the fringes of various moods can be properly examined, along with the audiences attentiveness. His audiovisual installations were also seen in galleries around Prague, but also in London and Berlin, and he has also worked on various projects focusing on music for film and TV.