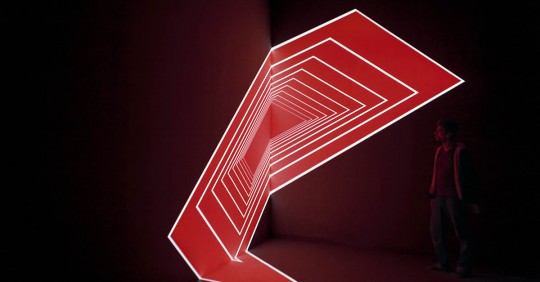 Olivier Ratsi is a French visual artist whose work is mainly based upon representations of space’s perception and the experience of reality.

He has developed a creative process based on the deconstruction of space and time. Deconstruction or fragmentation act mainly as an emotion trigger, which does not aim at showing what things could be, but more at questioning their references.

The Echolyse project from Olivier Ratsi considers objective reality, time, space and matter as intangible elements of information and uses these notions through installations that aim to question references to the perception of space.

The visual content – named “peelings”- is created from spatial data from the projection surface, according to the perspective observed by the viewer,from a specific point. These forms, or “peelings”, are projected using a traditional mapping technique through the same projection surface of the installation.

The whole experience of this project is based on the specific point of view. Once the viewer is positioned on the predetermined point of view, the “peelings” are revealed as anamorphosis that have dematerialized from their projection surface. The simple geometric elements, which at first seemed to be flat, suddenly begin to define a new space.The illusion of a new dimension within the installation appears under different layers, which seem to leave their physical surface behind them.

Olivier Ratsi is a French visual artist whose work is…