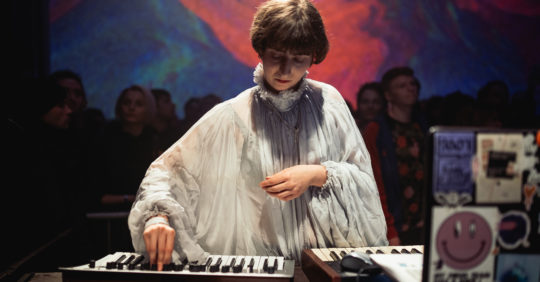 Poly Chain is a project of Sasha Zakrevska – a composer, curator, DJ, designer and radio host from Kyiv, Ukraine. Sasha started her musical journey at the age of 4, taking piano classes. After school she continued in a psychedelic rock/shoegaze band named ‘Summer God Teachings’, where she began to explore the world of synthesizers. As Poly Chain she started to perform after moving to Poland. Poly Chain took part in a series of Polish local parties such as ‘Syntetyk’, ‘Brutaż’, ‘Dype’, ‘Trips for Lonely Hearted’ and ‘Flauta’ as well as big and DIY-festivals: Unsound, Upper, DYM, Next Sound, Sanatorium Dzwięku and more.

She also composed tracks for theater and museum performances, working with local and international dance crews. During summer 2018 she’s been in charge of the music program in an illegal art space called ‘U Agatona’ in the centre of Warsawi. Sasha invited Ukrainian artists such as Mokri Dereva or Vladimir Gnatenko. After she returned to Ukraine in 2018 she continued her curatorial activity in form of radio show titled “Spaceship Tunes” which represents the style of music she enjoys, but probably never plays in the club. In 2019 Sasha already released two albums, a collaboration with Bartosh Kruczyński, named “pulses” on greek’s ‘Into the light Records’ and her solo album “+/-” on BAS.kolektyw. 12 of December Poly Chain released a cassette tape album on the label Mondoj.

Maintenant Festival’s Arnaud Briens has made a special mix composed…