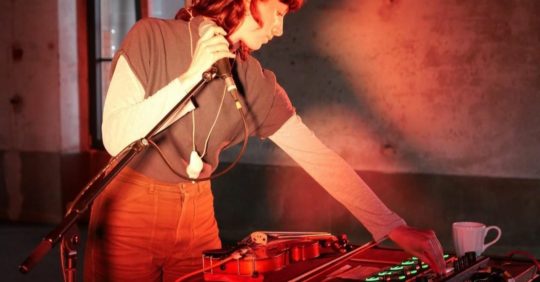 Roxane Métayer was born in France in 1992. She learned to play the violin at a young age, and then continued her studies in Belgium, at the Ecole de Recherches Graphiques, where she obtained her Master’s degree, in Speculative Narration, Narratives and Experiments.

She continues her practice as a visual artist and musician, based in Brussels. She has released several albums with the labels Primordial Void, Vlek, Kraak, and Morc, and has a few records planned in the coming year with Marionnet Label, Student of decay, Morc and Wabisabi tapes. Her latest shows and festival includes Meakusma Festival, schiev festival, les Ateliers Claus…

Through different mediums and materials such as beeswax, clay, or soap, her visual work stages a fictional fauna and flora. Guided by an organic imagery, she draws natural environments she has experienced, to create evocations of them. She’s also producing videos, where the sound holds a central place. Collages composed of sound recordings made in the field, sounds that she produces herself with different string and wind instruments as well as her own voice are some of its constituent elements.
She exhibited in 2020 at the CACLB, for the exhibition M/Ondes and this year for a solo show during the MV Festival in Dijon.

Roxane Métayer was born in France in 1992. She learned…