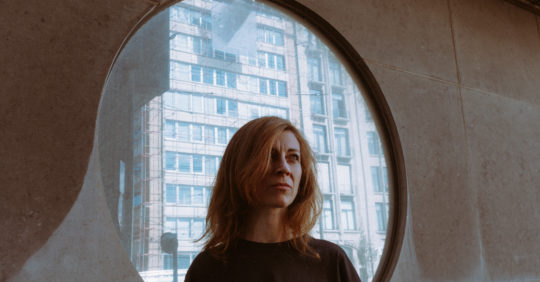 Stellar OM Source is the project of Christelle Gualdi, a French-Italian music producer, DJ and architect born in Paris and based in Belgium. Active for more than a decade, Christelle’s acclaimed 2013 album Joy One Mile and Nite Glo (2015), both on the boundary-pushing New-York label RVNG Intl firmly established her as an artist to watch out for. Both releases settled her musical direction. She creates enveloping environments, given shape by the rush of live performance and bring elements of techno, house and new-wave in a unique musical palette, marking out her signature of emotive uplifting melodies and contagious, bassline-centered grooves. Returning to music production after a 3 years break she released the EP ‘I See Through You’ on Dekmantel Records and was featured on Resident Advisor.

Christelle’s famed all-analog live sets create electrifying and energizing performances. Her DJ sets also have a distinct style: genre-melting, rich in rhythms, stories and references, they can bring the dark heaviness in late night settings as well as sensual vibes for soundtracks. Not surprisingly, she has toured and performed in most of Europe’s forward-thinking clubs and music festivals, on dance-floors across the world from Rio to Bangalore. Christelle is also a passionate practicing architect and artist with different creative outlets.