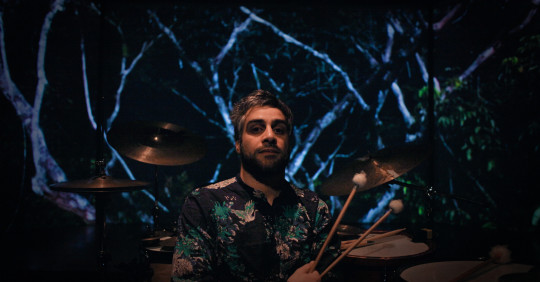 Uriel Barthélémi is a drummer, composer and electro-acoustic musician. Following his studies at the conservatoires of Reims, La Courneuve, Montreuil, and Ircam, he embarked upon electro-acoustic compositional work. This has led him to collaborate in numerous areas of the performing arts from 2002 onwards: dance, marionettes, theatre, as well as the visual arts.

In parallel with his compositional work, he performs as a drummer for several projects and conducts research into the drum and computer connection, developing his own softwares in Max-Msp. These multiple themes have made him reflect upon the concepts of performance and improvisation, to take into account the concepts of plasticity and physicality of sound through spatial layout, as well as questioning the place of the performer (movements, energy, corporeality) and psychological contexts (intentions, cinematographic colors, sonic staging, and so on). His recent work enquires into these themes and adopts a different angle each time.Intimately combining drums and electronics, a flexible composing style and improvisation he has had works commissioned by Lafayette Anticipation, Parades for FIAC, Maerzmusik, Césaré – CNCM, Sacem / CDMC, Al Mamal Art Foundation, Sharjah Art Foundation.

He collaborates and appears with many artists, such as Kazuyuki Kishino (KK NULL), Hélène Breschand, Tarek Atoui, Tim Etchells, Nikhil Chopra, Hassan Khan, Taro Shinoda, and is also an associate composer of the Soundtrack Company. He has played and performed in music and performances festivals such as Jazzmandu (2009, Katmandu, Nepal), The Jerusalem show (2010, Jerusalem Est), Irtijal (2010, Beirut, LB), Les Détours de Babel (2011, Grenoble, FR), Performa (2011, N.Y., U.S.), and many others.