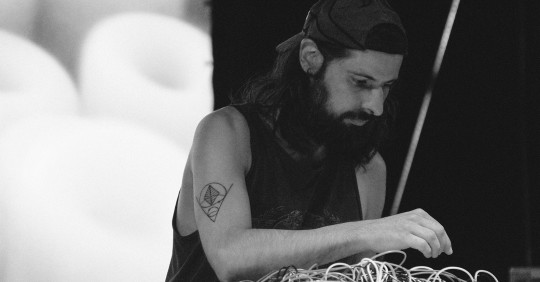 The story of the project starts in 2011. Back from the US where he spent some time touring, hanging out with friends and listening to DJ Screw, High Wolf sat down in his studio and, without any plan, recorded Straight Cassette within a couple of days. It was kind of a weird mix of free jazz influences, pitched-down vocals and ambient synthscapes – this first album came out on tape on High Wolf’s DIY label Winged Sun.

Only a few copies of the debut recording were produced and there was no promotion; it was meant for the tape to be ignored and forgotten. But for some reason it slowly gained quite an obscure reputation which lead to a vinyl reissue on the French label Laitbac in 2014. Since then, it’s been more widely rediscovered, and with perfect timing: after thinking Black Zone Myth Chant was the buried project of a sole record, High Wolf, under the influence of Editions Gravats owners Low Jack & Jean Carval, had started to work on a follow up. The said album came out in 2015, entitled Mane, Thecel, Phares. Successfully received both by the press and the audience, it was time for Black Zone Myth Chant to make his live debut.

Black Zone Myth Chant kept touring Europe in 2016, booked by clubs as well as by festivals or DIY experimental venues. The live set was developed rather differently from the record but remained true to its spirit: complex but physical drum beats, modular synth experimentation, airy melodies and his deep signature vocals.

2017 shall see the release of new records. A new LP on Editions Gravats first, then later a 12″ on Shelter Press. When the time is right. When the planets are properly aligned.

Black Zone Myth Chant is a project of Afrocentric psychedelia…

Listen to a special Resonance Extra broadcast, devoted to the…

Our SHAPE showcase at Novas Frequências in Rio de Janeiro kicks off on 3 December with no less than 13 SHAPE acts from the current as well as the upcoming 2017 roster, including Toxe, J. G. Biberkopf, Mr Mitch, Black Zone Myth Chant and several others. We’ve put together a Soundcloud playlist with tracks by those artists who will represent SHAPE in Brazil and who you will be hearing more about in connection with our platform next year.