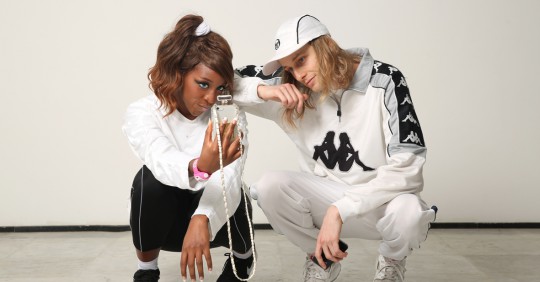 Ideal Corpus is a French duo formed by Ciel and Fructify. Stemming from the net generation, their musical universe is a hybrid of tropical-future-bass-ghetto-jersey-footwork-EDM-happy-hardcore-pop evolving at the speed of the internet as well as according to their desires. Their purpose is to represent the post-internet musical scene by approaching the questions of hyper-cultures. Their philosophical stance is one of radical enthusiasm as a way of surpassing oneself and transforming dreams into raves.

With a double release in 2013 called ¥ÕŮPİ on labels White Colours and Post Religion, and tours throughout Europe and Japan alongside names like Yung Lean, Panteros666, Tielsie (PC Music), Maltine Records or JACK댄스, it is on Knightwerk, the key label for new bass music, that they will release D.R.E.A.M (in 2015), an album with powerful beats submerged by spacey sounds where their pitched voices become entangled with lyrics as optimistic as they are existentialist. They also feature on the first release of the label Club Late Music.

Ideal Corpus is a French duo formed by Ciel and…