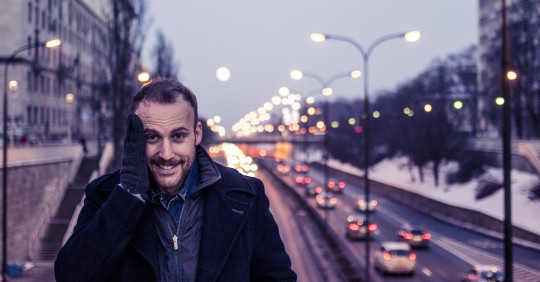 Piotr Kurek is a Warsaw based musician known from his numerous aliases; albums released for Digitalis, Crónica, Sangloplasmo, Dunno Recordings; collaborations (most notably with Sylvia Monnier as Suaves Figures, Hubert Zemler as Piętnastka and Francesco de Gallo as ABRADA) and rather peculiar DJ sets (as one of the founders of Warsaw’s Brutaż and Smutaż parties). From his usage of tape and organ patterns to synthesizers and loosely improvised guitars, he firmly established himself as one of the most diverse Polish musicians with an entirely unique approach.

His recent album, AHH-OHH, released under the Heroiny moniker by Polish Dunno Recordings, was probably one of the most confusing releases of 2015. His blending of dissonant guitar strums with house drum machine jams and voice made for an odd but surprisingly funky LP that fails at being easily classified but has quickly spread around small record shops in EU and Japan.

Kurek has participated in numerous music festivals including CTM, Unsound, OFF, Elevate and UH Fest as well as participating in extensive EU and US/CAN tours. In 2014 and 2015 he opened for Bonnie “Prince” Billy’s two European mini- tours.

Stream a new TodaysArt festival-themed mix by DJ Randstad of…

Piotr Kurek is a Warsaw based musician known for his…