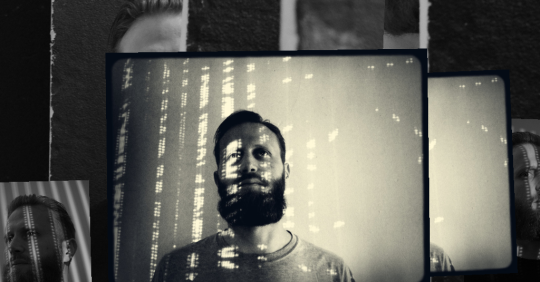 ..is an electronic musician and multimedia artist from London exploring low frequency vibration with physical intervention through DJ sets & live performance and via recorded media. He equally examines the structural occupation and perception of opti-sonic transmissions through home coded audiovisual installations and the emergent behaviour of chaotic systems by simple rule-based repetition through generative design.

With echoes of haunted dance halls and distant raves coursing through his sound, spatial subverted the UK bass scene by releasing a limited 10” on his newly christened infrasonics imprint in late 2008.

The expansion of dubstep’s horizon with a technoid garage hybrid combined with the minimal aesthetic of reticence with design and information proved compelling in an age of categorisation and communication overload. The record was all but sold out prior to the official release date.

He expanded his reach during 2012 – 2013 with a batch of releases on Well Rounded, Stillcold, Niche & Bump and WNCL. He signed to Ultramajic in 2014 as an outlet for unfettered and impulsive club material with a well received 4 track release that gained global airplay.

Since his project’s inception in 2012, spatial has continued to develop the home coded Primitives opti-sonic performative installation which was shown at festivals including Supernormal, Wire magazine’s Off The Page, Naples Independent Film Festival and renowned venues such as Cafe OTO and Apiary Studios.

Infrasonics rebooted in 2015 with the Emergence series of 12”s, each accompanied with a generative visual design released via the Internet.

Ahead of his upcoming performance at the SHAPE showcase of…

spatial is an electronic musician and multimedia artist from London exploring…