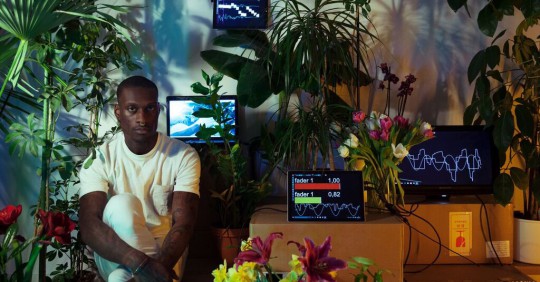 After studying dance, Kirikoo Des aka NSDOS, felt the need to create his own sound in order to explore movement. This is how he started imagining a whole new sonic order, an alternative approach to music –through abstraction. NSDOS can’t restrain himself to existing technological tools and softwares, he prefers creating his own mediums: futurist instruments made of old audio converters (carte son), Gameboy emulators, pieces of metal dismantled and weld together giving form to surreal machines. Surrounded by his hybrid tools, NSDOS unravels the rectilinear anatomy of techno music. Textures are exploded, sounds mutilated, and brought back to their essence. This sonic odyssey, NSDOS initiated in his native town Paris before exploring it deeper in Berlin –a city that he sees as a giant laboratory in which he experimented the field of possibilities. A huge admirer of the Dada and Lettrism movements, NSDOS can be considered as the offspring of a DIY culture.

He ranks among his icons artists such as Christian Marley, Stelarc or Donna Haraway who gave him a desire to push the limits of the body, objects and sound. His alternative vision and the way he reinterprets technological tools have made him one of the most important techno hackers of his generation. NSDOS doesn’t create, he regenerates and transmutes music. His creative path is empirical, sometimes organic as he puts sensors on insects, his public in trance, trees –everything that comes on his way –and transcribes their movement into sounds. After three maxis, Lazer Connect in 2013, Female guest in 2015 both signed to Parisian music label Clekcleckboom Recordings and Money Exchange published in 2016 on his label Standalone Complex, his new album, Intuition, intervenes as the completion of his organic vision of music.

Inspired by meteorological stations and according to a principle of «bio feedback», NSDOS surveyed the movements of nature, turned into data before translating them into sounds, textures and rhythms. The album comes with a series of 5 videos detailing the creative process of the artist –from recording in the middle of nature to the studio. In Intuition, NSDOS splinters the boundaries between genres and places techno as a matrix. His album reveals his sense of discipline, one that he draws from his passion from Japanese dance Buto, as well as his interest for biology, his experimental aura through industrial, sometimes nearly metal sounds. All these elements form the essence of whole new movement, unclassifiable, of which he constantly pushes the frontiers. Intuition will be released on May 19 2017.

After studying dance, Kirikoo Des aka NSDOS, felt the need…