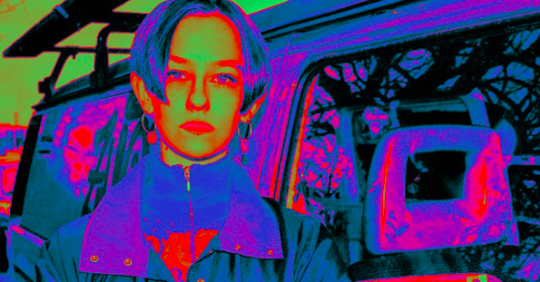 Caterina Barbieri is a Berlin-based Italian composer who explores themes related to machine intelligence and object oriented perception in sound through a focus on minimalism.

Barbieri’s work explores the polyphonic and polyrhythmic potential of synthesisers to draw complex and severe geometries in time and space, aiming to reveal the integrative, cognitive feedback between humans and technology as well as the psycho-physical effects of repetition and pattern-based operations in music.

Barbieri holds a diploma in classical guitar and a bachelor’s degree in electro-acoustic music from the conservatory of Bologna, Italy, alongside a bachelor’s degree from the Faculty of Humanities and Philosophy with a thesis in Ethnomusicology about Hindustani music and Minimalism.

Her debut album Vertical, composed for Buchla 200 and vocals, was produced between Elektronmusikstudion and the Royal University of Music in Stockholm and released via Important Records’ Cassauna offshoot (8 October 2014). Since then, her work has been performed in festivals such as The Long Now, MaerzMusik and Atonal (DE), CTM Vorspiel (DE), HKW (DE), Ableton Loop (DE), RBMA, Biennale di Venezia 2017 (IT), De Montfort University (UK), Manchester University (UK).

Barbieri has collaborated with Berlin festival Atonal on multimedia productions including her collaboration with Kali Malone Upper Glossa, and 2017 saw her release the solo 2LP Patterns of Consciousness on Important Records (named so far in several ‘Best of 2017’ music round-ups) as well as her collaborative project with Carlo Maria Punctum on Berlin imprint Summe.

Listen to an hour-long show, devoted to one of the…