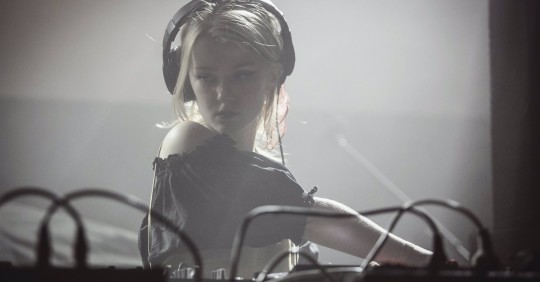 Swedish DJ and producer Toxe is an exciting new voice in experimental club music and a central figure within STAYCORE, the groundbreaking Stockholm crew and label also home to KABLAM, mobilegirl and Mechatok.

Born Tove Angeelii and based in Gothenburg, Toxe flits between hi-tech futurism and human emotion. Her tracks quake with heavy drums and cut-glass synths, nodding to fellow dancefloor disrupters like Kamixlo and Total Freedom. In 2015, while still in highschool, she released her debut EP Muscle Memory on Staycore and a Britney Spears-sampling single, Xic on Rabit’s Halcyon Veil imprint. Named a producer to watch by Noisey, FADER and Dazed, she also participated in the 2015 Red Bull Music Academy in Paris and has been appearing regularly since on bills for club nights around Europe.

A digital native whose aesthetic translates fluidly into design, Toxe makes her own artwork and music videos. (The official music video for EP cut Determina uses footage of spelunkers in headlamps, squeezing and sloshing their way through a cave, to claustrophobic and weirdly compelling effect.) Toxe is also a founding member of Sister, an online forum and now SoundCloud mix series for women in dance music.

Curious about our sonic expedition to Rio? Tune in to…

Our SHAPE showcase at Novas Frequências in Rio de Janeiro kicks off on 3 December with no less than 13 SHAPE acts from the current as well as the upcoming 2017 roster, including Toxe, J. G. Biberkopf, Mr Mitch, Black Zone Myth Chant and several others. We’ve put together a Soundcloud playlist with tracks by those artists who will represent SHAPE in Brazil and who you will be hearing more about in connection with our platform next year.