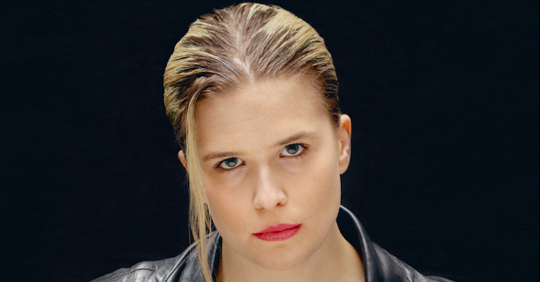 DJ and producer KABLAM (aka Kajsa Blom) was born by the Swedish west coast and moved to Berlin in 2012. She started her career as a DJ, as one of the residents of Berlin’s Janus party alongside co-residents Lotic and M.E.S.H. Janus is now a label and has held parties at Berghain and booked producers and DJs Arca, DJ Hvad, Total Freedom, Nigga Fox and more.

Blom’s style, in keeping with her Janus peers, experiments with the radical possibilities of music, of what a club environment is or can be and of what a dance floor looks and feels like. As a DJ, she manipulates digital tracks, taking advantage of the advanced possibilities offered by CDJs. She likes to play and mix contrasting genres, finding imaginative points of entry and combinations between them, using the parameters of space rather than time to structure the music.

As a producer Blom has so far released tracks and edits unofficially on her Soundcloud. She is affiliated with the Stockholm-based label Staycore and has collaborated with and made a remix for one of its originators, Dinamarca. Blom is currently residing in Stockholm where she is working on her first official release, scheduled for mid-2016.

As a co-resident of Berlin club night Janus, M.E.S.H. has…

TOLE aims to create compositions rather than tracks, force rather…

Listen to a special one-hour radio show, devoted to the…

Rokolectiv is Bucharest’s leading festival for electronic music and related visual arts. Over the years, Rokolectiv has invited over 250 artists and professionals in the field, contributing to the development of the local scene and generating collaboration projects between musicians, visual artists, contemporary dancers, and promoters. This year, the festival’s 11th edition takes place between 21. – 23. April 2016. The festival is organised by Cosmin Tapu and Mihaela Vasile.